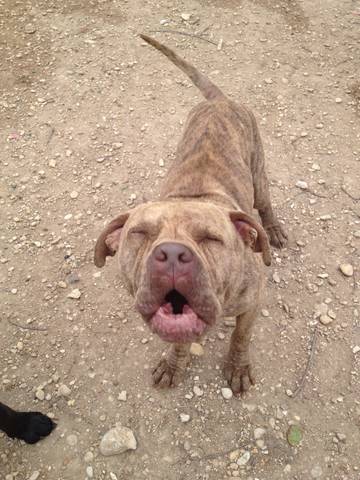 May We All Give Thanks! November 2015 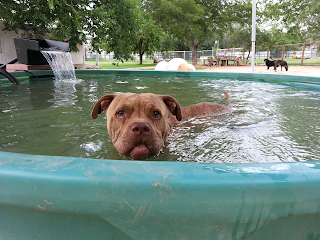 May We All Give Thanks!

For the water we drink and swim in. 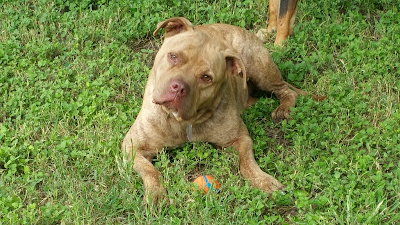 For the earth we dance and play upon. 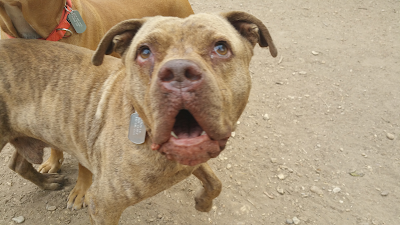 For The Mystery of our lives here. 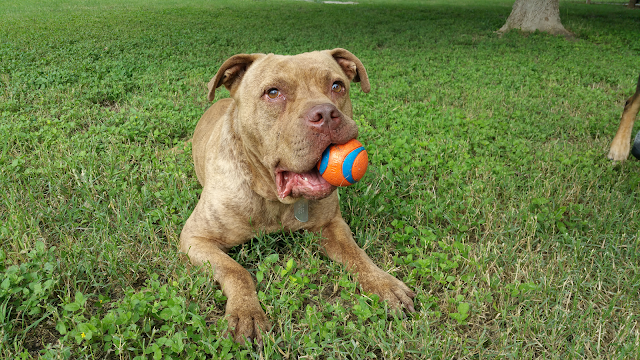 Wishing you All of Beautiful, Peace-filled, and Joyous Holiday Season,
Love,
Benny
Posted by PJ at 6:14 PM No comments:

Happy New Year to Everyone!
I have been busy with all the the Holiday Celebration we do here.  Here I am with my new friend a 7 week old Goldendoodle: 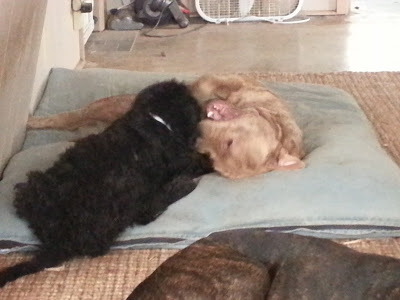 Here I am wishing you all a very Happy New Year:

After so much play and excitement my friends and I took a nap:


As I am sure you can imagine, with all my duties, even after napping with my friends I felt the need for further rest.  I truly thought I had not been noticed and yet as you will see in the photo below, Doug caught me napping on his couch: 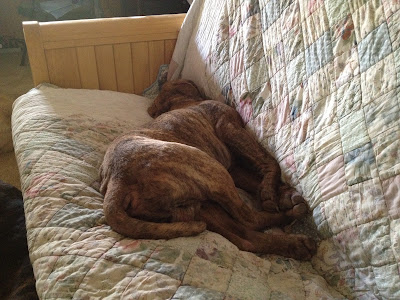 Wishing Peace to All humans and non-humans on planet earth
Love,
Benny
Posted by PJ at 2:37 PM 2 comments: 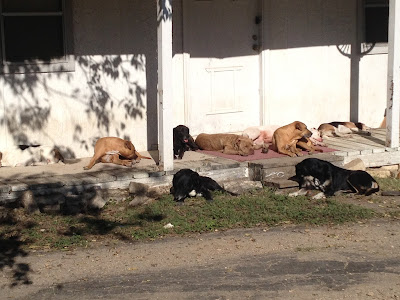 Here I am, peacefully enjoying the beautiful autumn sun with my pack.

May humans learn to tolerate their differences and cooperate for the Peace of All beings on this planet,
May humans grow in courage and compassion towards each other and all beings,
May humans and the planet begin to heal.
Wishing you a Peace Filled 'Thanks' giving,
Love,
Benny

Doug was cleaning out the water pails when who should come running up? 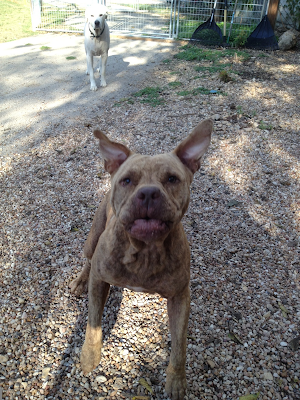 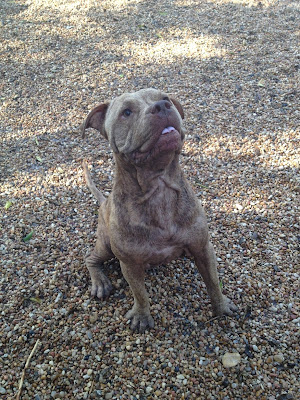 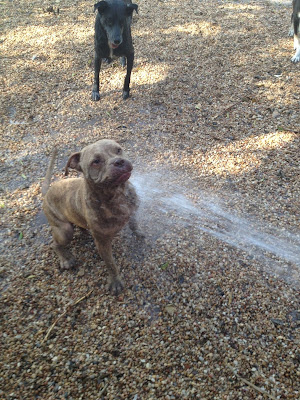 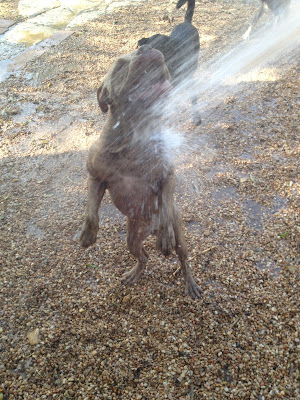 The planet does not need more 'successful people'. The planet desperately needs more peacemakers, healers, restorers, storytellers and lovers of all kinds. It needs people to live well in their places. It needs people with moral courage willing to join the struggle to make the world habitable and humane and these qualities have little to do with success as our culture has set. " - H.H.The Dalai Lama
Posted by PJ at 8:00 PM 1 comment: 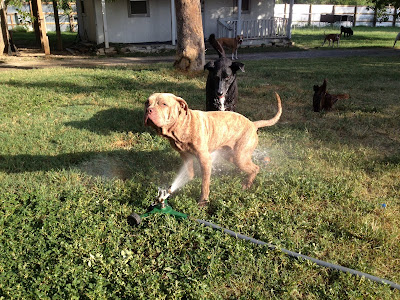 It is important to start our days with kindness and to find a cool spot in the heat of summer.

The Heartbreak of Spindletop

Many people have heard about the raid of Spindletop Rescue and the heartbreaking discoveries. I have been following the press releases and information being given and have noticed a consistent behavior that happens with many devastating revelations, the behavior of scapegoating the people who trusted their animals to Spindletop Rescue. It is the same scapegoating behavior that the brave victims of Jerry Sandusky had to endure when they came forward, countless rape victims endure this, and victims of child abuse (especially when it involves priests as the abusers).
From Wikipedia:
a scapegoat may be a child, employee, peer, ethnic or religious group, or country singled out for unmerited negative treatment or blame.[1]
We want to trust  that an Animal Sanctuary is actually a sanctuary, we want to trust that Priests would never molest children but will protect them as will parents and coaches.
Unfortunately we live in a culture where bullying is embraced.  How can I write this?  Doesn't everyone 'disapprove' of bullying?  Bullying is the imposition of your will, your desires, your wishes, on another human being (or non human) by force or intimidation.  It is making someone do what you want them to do because you are stronger.  Being 'stronger' may be accomplished by: money, physical strength,  status, job position, age, intelligence, beauty, being part of a group, skin color, gender....etc.
How do atrocities like Spindletop happen?  Bullies are in charge.  Bullies tend to have an unrealistically high self esteem, they are narcissistic, and they feel that their needs can and 'Should' be met by others.  They have an inflated sense of being superior to others and being entitled to special privileges.  They have a lack of empathy.  They demand unconditional approval and support from their followers.  If their followers do not give them unconditional approval they are bullied into line.  All of us want to belong to a group, we are not designed to live alone.  Anyone who has been  in a group situation where there were unspoken rules, conflicted messages, hinted recriminations, and emotionally abusive behavior understands the message of that group is," Accept a certain amount of pain and guilt and you too can dish it out when you have the leverage."
What happens to those who refuse to play along with this group?  They are scapegoated and often this has the result of, because we need to be part of a group, them learning to be a member of this unhealthy group by blaming themselves for being not being okay rather than continuing to take a stand or leaving.
What happens when a leader who has been abusing those 'weaker' such as happened at Spindletop get found out?
Often this 'leaders' collaborators make excuses for their leaders behaviors (there was flooding at Spindeltop), providing advice and insults to others in an effort avoid their own discomfort while adding merit to the bully/leaders behavior.  Defending a bully removes the collaborator from the bullies line of fire (until the bully wants something from this collaborator).
Should the people who brought their dogs to Spindletop for the promised sanctuary and help be the ones who are held as 'guilty'?  Well, in a culture where bullying is embraced they will be.
However...
They are the people who did everything possible to help and protect dogs who needed help.  These are the brave people we need to be supporting not tearing down.  They took action to protect those who have no voice.
They are the individuals and small rescues in our culture today who believe in helping and supporting those who are weaker not preying upon them.  They were sadly, preyed upon by the leaders of Spindletop.
They are heroes who are heartbroken because of their empathy for all living creatures.  They are devastated by what occured at Spindletop.
Let us support, not scapegoat, these brave, hearted people. 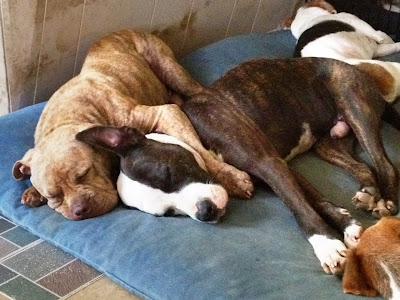 The Universe is full of magical things, patiently waiting for our wits to grow sharper" - Eden Phillpotts 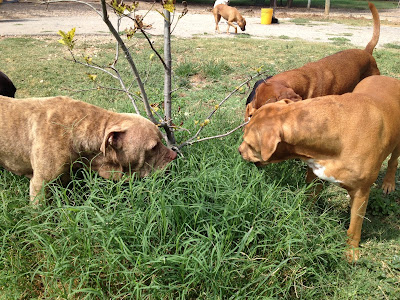 PJ
I am grateful to be a participant in the Mysterious Creative Process.